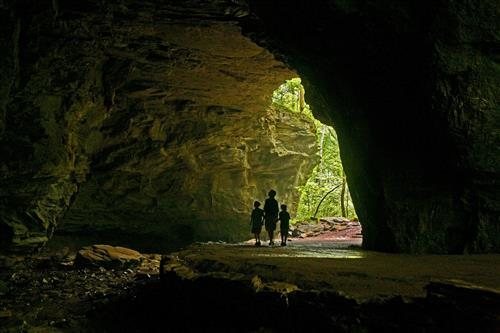 The name 'Cave X' came about because there are 4 entrances that meet in the center, like an X. The cave is said to be haunted by two Cherokee lovers and it has been said that warrior Huraken found the cave and its hidden vein of silver, but kept it a secret so that he could use it to make gifts for the chief’s daughter, Manuita. When Huraken didn't come home after battle, Manuita believed he was dead, so she committed suicide by jumping off the cliff to her death. But he had only gone to the cave, and had decided to ask Manuita's to marry him and wanted to make her some gifts for the occasion. He came across Manuita's body on his way home, and hit it in the cave to watch over it but whent he chief found out, he thought Huraken was to blame for his daughter's death. His last request was to visit Manuita's body one last time in the cave, but he never made it out. Years later, inside the cave were found the bones of two bodies and some silver pieces. The caves and the legend have been written about in books.